During another stop on one of the planets on the verge of universe crew of small transport ship called Serenity seeks possible passengers to earn some money. They pick up 3 men - one turns out to be a priest called Book, another one is Alliance officer in disguise trying to arrest teh thirs passenger - a young man with mysterious box. Captain Malcolm Reynolds, former soldier, uses his gut-feeling to determine which side he should help. First of all he wants to see what is inside he box. That will change his future

Sci fi TV series that mixed the classic science fiction with western-like stories - from smuggling cattle, fistfights in the bars to bank robberies. The crew set of ex-soldiers and outcasts take any mission they can find to survive. They have no money, so they have to be fast and take risks. All of it seasoned with elements of humour gave quite original and entertaining series. The production was cancelled after only 14 episodes, which started the campaign of fans to bring the series back. They did not manage to change the mind of the network, but after 2 years the film "Serenity" was made with sort of closure of the series.

Overall interesting idea, well played, humour was what made all the difference in the world, but the stories itself were rather naive and the format of 40 minutes per episode made some of the plots cut short. 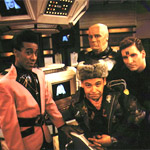 When Dave Lister learns that he is the last human being in the universe it is only the beginning of his adventures. 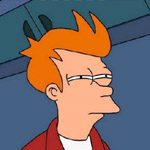 Pizza boy down on his luck gets frozen for 1000 years to find the world completely changed.